This collection of photographs is of our customers enjoying the sail(s) we have built for them (unless otherwise noted). If you have Squeteague sails on your boat, and have a nice photograph of the boat sailing that you would like to see here, email it to us with a sentence or two about it. 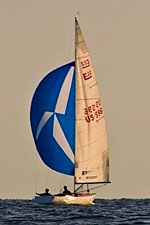 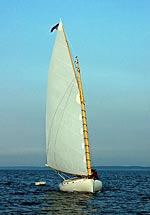 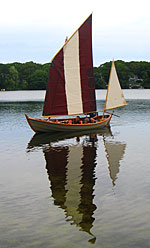 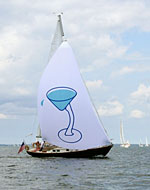 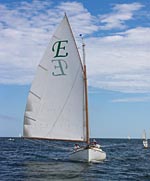 
Owned by Rodger Bowker casting off from her mooring in Wild Harbor, North Falmouth. Libby Bowker at the helm. Squeteague created the sail with red and white alternating panels and blue stars. 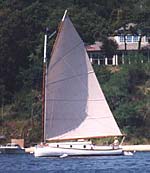 
built in 1906. This boat owned by Peter & Dorothy Haney has an unusual full-batten sail. Peter, who is an architect, got the idea from one of Nathaniel Herreshoff's own catboats and redesigned the sail plan with a full-batten rig. He provided us with beautiful blue prints of the new plan to work from for building the sail. 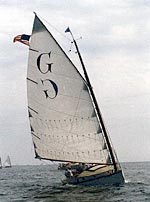 
Qwned by Tom Doherty sailing out of Fairhaven, MA with his Squeteague main and 135% genoa. 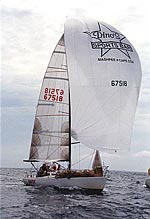 
This boat carries a complete inventory of Squeteague sails including the spinnaker with custom graphics. 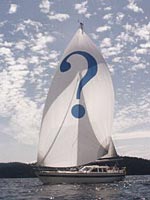 at the time of the photo owned by Sandy Weld of Chestnut Hill, MA flying its Squeteague asymmetrical spinnaker off the coast of Alaska. The question mark insignia is 25 feet tall! 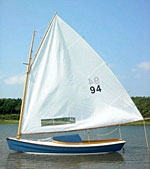 
Boat built by Conrad Geyser in 2010. Owner Tom Klein says, "The boat is very fast and Iĺm sure the Squeteague sail is a big factor." 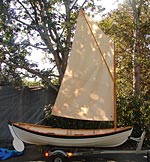 
Built by Larry Mahan in Marstons Mills, Larinda was a 26 year backyard building project. Originally designed with a standard 2 masted fore and aft schooner rig, Larry elected to rig her as 2 masted junk. She is currently undergoing a refit in Nova Scotia after being struck and sunk. She carries a complete suit of Squeteague sails. 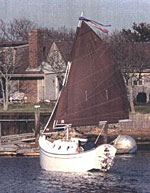 
This 20 foot, steel-hulled, pocket-cruiser was designed and built by Larry Brown. It is shown here flying its Squeteague lateen main and jib. We also built an asymmetrical spinnaker for her (not shown). 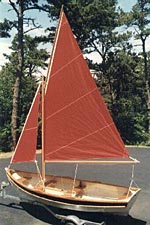 
(12' 10") owned and built by Brian Lobdell of Marstons Mills from plans by Wooden Boat Magazine. Brian finished the boat this sping and had us make the sails for her. 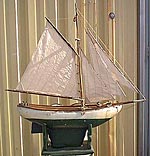 Antique Model of a Friendship Sloop


These replacement sails were made for a model owned by an antique dealer in Boston. Cose-up of sail details.


This photo is kind of special. It came to us from Ed Roberts of Glen Head, NY with the following note:

Enclosed is an 8x10 of me sailing the Kunhardt family's Anderson cat Romula on Squeteague Harbor, August 1936. This was one of a fleet of six boats purchased by various Cataumet families in 1925 from Anderson's Boatyard in Wareham. Although an Anderson design, the boats were actually built by Mert Long, who was employed by Anderson at the time. This picture was taken from the end of the Kunhardt (Emmons) dock. About ten years ago the faded original snapshot was re photographed and restored by the photo lab at Mystic Seaport.

Ed first discovered Squeteague Sailmakers on the Web and ordered a new suit of sails for the '97 season for his Bullseye which he sails on Long Island Sound.